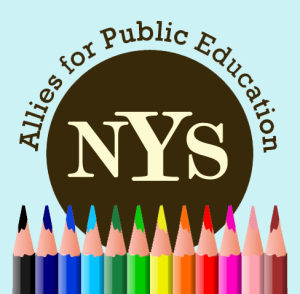 Across the state, grassroots education advocacy organizations including New York State Allies for Public Education (NYSAPE), Long Island Opt Out, New York BATs, NYC Opt Out and Stronger Together, are urging parents to opt out of the NYS Common Core state tests.

With New York State Common Core state tests in grades 3-8 set to begin this month, hundreds of thousands of parents have notified school officials that they will refuse these flawed and harmful tests. Despite Commissioner Elia’s claims that significant changes to these tests have been made in response to the concerns of the public, parents and educators know that nothing could be further from the truth.

Jeanette Deutermann, Long Island public school parent, founder of Long Island Opt Out and NYSAPE said, “We have made great strides over the past few years. As a result of the opt out movement, many agencies, organizations, and state leaders connected to education have either willingly or forcibly shifted towards a philosophy of whole child teaching and learning, recognizing the voting power that this movement possesses. However, this shift has not resulted in the legislative changes required to stop the misuse of test scores to rank, sort, and punish our schools. We must continue to refuse the tests until the NYS education law is amended.”

New York City schools are resorting to misinformation and scare tactics to discourage opt out in communities that have less access to information, especially in Title I schools. While our schools should be empowering parents to make thoughtful decisions on behalf of their children, what we are seeing instead is the usurpation of parental rights. To be clear, every parent has the right to refuse the state tests simply by notifying their child’s school officials.” said Johanna Garcia, NYC public school parent and Co-President of District 6 President’s Council.

“As always, there are those who wish to contain our influence and weaken our resolve. Sadly, misinformation meant to strip the rights of parents and quell opt out has been disseminated by organizations and school leaders charged with overseeing the education our children. Facts are our weapon. Information is our strength.” Eileen Graham, Rochester public school parent and founder of the Black Student Leadership Organization.

Nate Morgan, President of Hastings Teachers Association and Vice Chair of Stronger Together Caucus said, “The tests are longer than ever with young students sitting for up to five hours per day for 6 days of testing and even longer now with the Commissioner’s untimed testing policy. The common core standards remain essentially unchanged and the benchmarks used to determine proficiency continue mislabel hundreds of thousands of students as failures. Teachers continue to have minimal input in test construction and in fact, are not even permitted to read the tests they are compelled to administer! Parents and educators recognize the failure of both Commissioner Elia and Governor Cuomo to respond to our concerns. The opt out movement will continue.”

“While Governor Cuomo is desperate to present himself as a progressive champion of education, his actions prove that his education platform is most closely aligned with that of federal Secretary of Education Betsy DeVos. Coupled with his failure to fully fund our public schools, Governor Cuomo’s refusal to amend the Education Transformation Act–a law that requires the use of junk science, unfairly punishes schools serving the most vulnerable students, and supports privatization efforts–proves that he cares little for our children and the well-being of our schools,” emphasized Marla Kilfoyle, Executive Director of BATs, NYS public school teacher, and parent of a NYS public school child.

We are encouraging parents to reject harmful and developmentally inappropriate tests along with non-researched standards, the continued misuse of assessment data, and efforts to punish and privatize the most under-funded schools by opting out of the 2017 NYS Common Core state tests.

NYSAPE is a grassroots coalition with over 50 parent and educator groups across the state.

This press release was reposted from the NYSAPE website: http://www.nysape.org/nysape-pr-optout2017.html